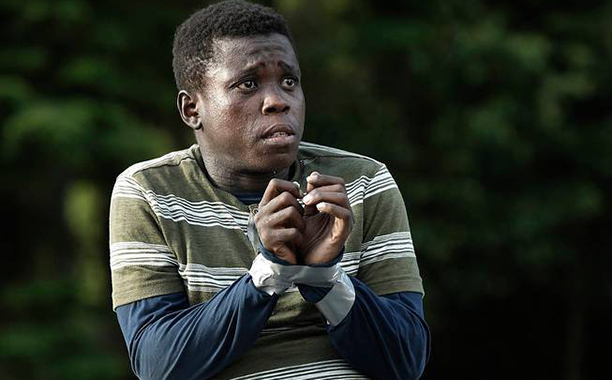 Many spoilers for season two. Also, I am mad.

Hello, Dirk Gently's Holistic Detective Agency. I have some questions.

Who came up with the idea to completely murder the character of Ken, who is possibly the best thing about the show?

Who looked at this and thought yes, we should take this hilarious soft boy and turn him into a manipulative, creepy douchebag who uses his best friends affection for him to trap her. It's not a heel face turn if we have him yell 'I'm on your side! in between militaristic bullshit and kicking the dead body he just murdered into a portal.

Ken's season one arch was incredible. He was thrown into a wild world of serial killing and danger and he had no clue what was happening and that made it all the more beautiful to watch him slowly find his feet and figure it all out. It was subtle and interesting. The plot accumulated in him literally coming out of nowhere to save the day. He has first hand experienced how the universe works in this show - chaotically, strangely, often scarily - but eventually, for good. He starts season two being tortured and you cannot tell me that being isolated in a large room, forced to sit in the same seat for six months, is not intentional, clear torture. He also starts this season as a true believer, offering some of the best inside into the workings of the show, and also a strong critique of everything Black Wing represents.

You can't lock these people up. It doesn't work like that. You need to let them do their thing.

If Ken had any kind of logical arch that led him from that point to literally the opposite, I probably wouldn't have liked it but I would have accepted it (a little. Maybe. I really love Ken.) If there was any justification, gradual subtle shifts, or reasoning behind it, this might have been okay. Dirk Gently doesn't typically let it's viewers in on everything going on, but it also doesn't typically leave you thinking "why did that happen?" The events are total madness but the characters make sense, and eventually, the events do too.

Ken disappearing into a bunch of files and coming out a completely different person is, frankly, bad writing. It relies on the viewer patching up holes and making faulty connections to a poorly executed 'power corrupts' narrative. The real Ken is the guy who throws his hands up in the air and yells 'Bart!' when he sees her again. The real Ken can be soft spoken. (The quietly strangled line: "that sounds like a murder spree" is possibly the best-delivered line in the entire show.) This new Ken uses softness to make a scared and hunted Mona think she can trust him. He manipulates Bart for the sake of an organisation that locked up children and put them through humiliating and dehumanising testing systems.

I was super jazzed when Ken started taking over Black Wing. My boy!!! I said It's your time!!! But apparently, someone murdered his character and shoved it into a black hole/portal/alternate timeline because New Ken is a cold-hearted bastard and it makes literally no sense. There was no gradual change in him. He just suddenly was an incredibly misguided threat to the rest of them willing to kill and maim people to keep them locked up. I hated it. It wasn't a good twist, it wasn't well written, and it wasn't Ken. The writers just threw one of their best characters under the bus so they'd have an emerging villain for the season's end.

The two people I've talked to about this have similar feelings. One of them, my friend Amy, said: "it would have been better if they killed him." She doesn't say this lightly. Ken is a character. If you kill who he is by turning him randomly into something completely different, he's dead AND who he was has been destroyed by this new, gross version. It sucks.