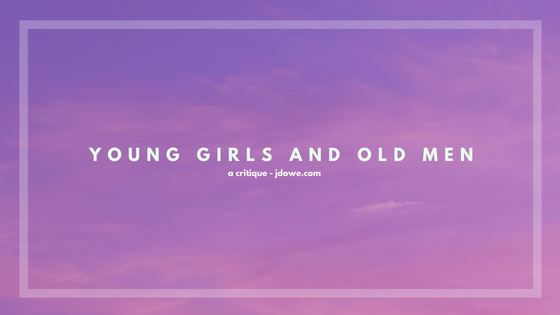 I'm going to be honest - before I discovered the joys of MLM and WLW representation, I shipped the heckle out of a few choice All-Powerful Male Dickheads/Teen Girl who comes into her own power through the course of events. As an adult I can look back on Jareth/Sarah (from Labryinth) and the like with a 'wooah that would have been terrible' perspective. As an adult I see teens as children, who will often test out boundaries as a part of growing up, and who need adults to set certain boundaries for them for their own emotional and physical safety. As an adult I don't want to read fanfiction (or fiction) about a seventeen year old dating a twenty-something, because I'm twenty-something, and can now fully appreciate the creepy inappropriateness of such a relationship, even when sex is not involved.

As a teenager, I saw myself and other teens as almost-if-not-entirely-grown up people. I was hurtling headfirst through space, reacting more than I acted, with little to no clue about what and who could hurt me the most. Being a teenager navigating relationships is a bit like being a toddler learning what things are. Touch the object, it cuts you, so you learn it's sharp. If the adults in your life are doing their job right, they'll do everything they can to teach you these important life lessons without you having to suffering the injury.

There are a ton of narratives that follow this trend, but shy from the actual cannonisation of the relationship for the obvious reasons.

The appeal of these narratives is fairly nebulous. In one sense, I suppose it can be pretty tantalising for teenage girls to see themselves as the kind of captivating fae creature that would drive an all-powerful, ancient manbeast to distraction. Adversaries into lovers is a well-loved trope for a reason, it's full of potential for sexy tension while being distant enough to make for some fun escapism, and when the triumpher is a teen girl beating an ancient, all-powerful man it makes sense that demographic would see that relationship and think "that is a romance I want."

Social concepts of relationships are generally constructed around this idea of girl/boy (heteronormative af) dynamics that are strongly rooted in conflict. Girls and boys can't get along. If he teases you it means he likes you. If she laughs at your joke she wants to have your teen babies. Girls and Boys, then Men and Women, are placed into relationship dynamics where the whole structure is based around the idea that they will never, ever, get along and that they also want to get all up on each other's sexy parts.

IS IT ANY WONDER, I ASK YOU that women and girls are drawn to narratives where a seemingly powerless female overcomes the mystical asshole and then dates the bejeezus out of him? There's romance, there's conflict, and - most tellingly, I think - there's a justification of girl power, because she is using it to overcome evil and then domesticate the bad guy. What are the negitive implications of this? Well, according to hand-wringers women and girls are incapable of telling the difference between fact and fiction, therefore any story written by and/or enjoyed by women must be shameless wishfulfilment (because wishfulfilment is evil and you should never enjoy stories that give you a sense of vicarious gratification, life is hell stop lying to yourself.)

I myself am more than happy to engage with critiques of narrative implications - there is plenty of stuff to be unpacked in any piece of writing. Once something is in the public eye, it because a reflection and a feeder of the public consciousness. People criticise 50 Shades of Grey because it does wishfulfilment in a way that many consider to be irresponsible (I haven't read it and I don't have an opinion, don't @me). This is a fair conversation to have - but where do you draw the line? For me, I have to wonder who is being criticised.

You could say that girls reading books that tell them to rehabilitate evil men or that dating adults is cool and sexy are in danger of internalising those ideas. More dangerous that a young girl's fantasy, in my opinion, is the social perception that a teenager girl who is abused by an adult man must have wanted it/teased him into it/asked for it ... and therefore it's at least partially her fault. As far as I can see, these narratives are only criticised from this same perspective, putting the ownus on the girls to have less problematic desires, not on the men to keep appropriate boundaries in place when interacting with children. Once again, the only way to protect girls is to take away things that they enjoy: replace their leggings with jeans, their lipgloss with chapstick, and the media they enjoy with media we've deemed "appropriate", and now, at last, they will be safe.

I'm all for writing new, better narratives that don't romanticise abusive relationship dynamics. But these appear in every medium, and across every genre. I have a feeling that adult men feeling emboldened to pursue teenage girls because they live in a society that places the burden of responsibility on the girls' shoulders are more dangerous than 13 years old fantasies about a goblin king.